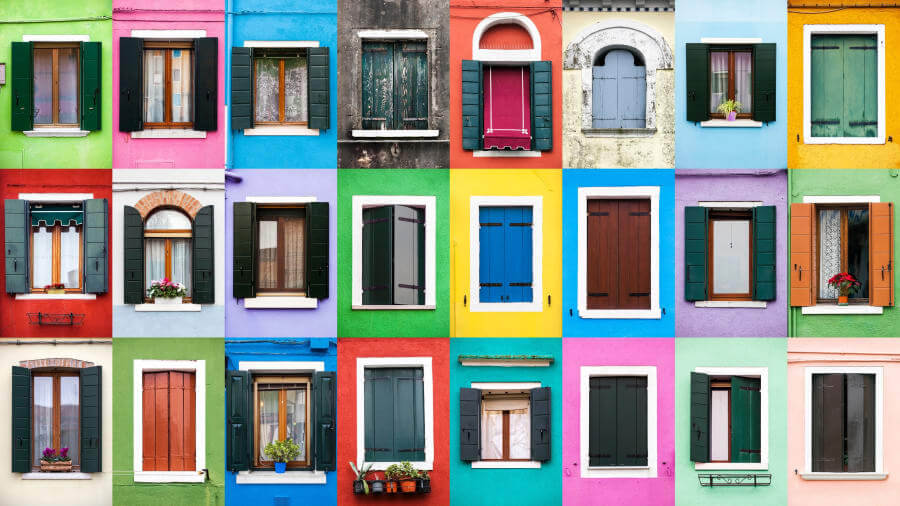 The Start of The Window

In the beginning, a window was merely an opening in a roof or wall that allowed light and air to enter a room. The old Norse word actually meant ‘wind eye’. Wooden shutters to keep out the weather and intruders came next, followed by a brilliant idea of making these shutters out of several thin slats of wood instead of one solid piece. Voila, louvered shutters let light and air pass through while still keeping out gentle intruders. Imagine the excitement when someone next came up with the idea of using oiled paper or flattened animal horn to allow the light to pass into a room through a window opening, while keeping the rain and cold air outside.

Finally, almost a thousand years ago, crude glass began to appear in window frames for those wealthy enough to afford it; and this was a major upgrade from paper, cloth or horn. Ah, to be a window salesman in those days…very few confusing choices and not much competition.

In 1696, not long after the French refined the manufacture of glass and started making ‘plate glass’, the British began taxing windows. This tax was sufficiently punishing, so people really did avoid putting windows in buildings where they could. The bricked-up window openings that are such a feature of many period buildings in Britain today were once usually painted to look like windows. The tax was sorely resented as ‘a tax on air and light’, and meant that many servants and others of constrained means were condemned to live in dark airless rooms.

In 1746 another duty was introduced that was based not on the number of windows but on the weight of the glass within them, so glass was made thin and weak throughout the Georgian period. Sometimes wire mesh was placed in the molten glass while it was hardening to add strength to the finished product. We still see this type of glass in commercial applications where security and strength are important, and it is called Georgian Wire Safety Glass in the trade.

The well-known ‘bulls-eye’ panes that are today much sought after as antiques, date back to this time as well. They are a consequence of the type of glass-making that produced what was known as crown glass (so called because it is slightly convex, or crown-shaped). The bulls-eye marked the place on a sheet of glass where the blower’s tool had been attached. Because that part of the glass was flawed, it escaped the tax and so developed a certain appeal among the frugal.

Builders would make a complete large window out of several small bulls-eye panes and the whole thing would be tax free! You can still see old inns in England where these panes are in use, especially in back rooms where the ‘cheapness’ of the proprietor would not be so obvious.

Words that we use today to describe parts of windows also go back to these early days in England, and were not overly imaginative. For example, the small piece of wood trim that was tacked to the frame and stopped the glass from falling out is called a ‘stop’. Today, all windows use ‘stops’ to hold the glass unit into the frame. Each piece of glass in a window is called a ‘lite’; presumably, because it lets in light.

Windows that open by sliding up and down are called ‘hung’ windows, because the moving unit is hung on a balance. If a window doesn’t open, it’s called a fixed lite window; because it is fixed in place. I remember several years ago talking to a chap who phoned our office inquiring about having his windows replaced. I asked him to describe what type of windows he was looking for, and he explained that the ones in his living room didn’t open. To confirm I understood what he wanted, I said: “so you want the ones in the living room to be fixed?” With the exasperated voice of someone who believes he is dealing with an idiot, he replied that he wanted them all fixed, that was why he’d called!

Now you know a bit about the history of windows, and can perhaps appreciate just how far technology has come since the days of flattened animal horn. Today’s window glass will keep out the heat of summer, let in the light, reduce unwanted sounds, clean itself, and make you cozy in the winter.